My wife e-mailed this to me. I use to bow hunt for moose back in the 90's.

Was able to get close but not this close!

seems to be not available Bob, embedding is cool too, if'n you have the chance

Thanks Brian, I have to learn how to do that. BTW after the 6 is the letter "O"!

Since you left out part of the web address, I just went to Youtube and searched for "moose charges bow hunter". This was the first result. I copied the embed code and then pasted it in my reply here. It's like black magic.

saw that some time ago, insane!
H

That bull is an Eastern Moose, its a good size but the Western Moose are Much Bigger.

I called a mature wesern moose in once and could not believe how big them things get! Called him in to about 40 yards but had no cover (trees) around in case he charges. We chatted back & forth until he lost interest and swam across a lake.

Friggin impresive to lay the least!!!


The hunter in the vid made a few mistakes and is luckey to be alive!

When my folks went to Alaska in 1980 after Dad retired they stopped at the Calgary stampede on the way .There they observed a few dog teams putting on an exibition and with a little talk on the subject .

A very experianced musher gave the talk and covered certain often discussed questions .One of them was what would be the greatest threat in the back country and most thought wolves .Not so says the musher . Wolves don't want to have a thing to do with a team of dogs .

A moose on the other hand can't tell a dog from a wolf .It's not uncommon to be charged by a big bull. ,head on .That big rascal will stomp every one of the dogs then go after the musher . Extremely foul tempered critters ,big too .

just mount one of these on your sled 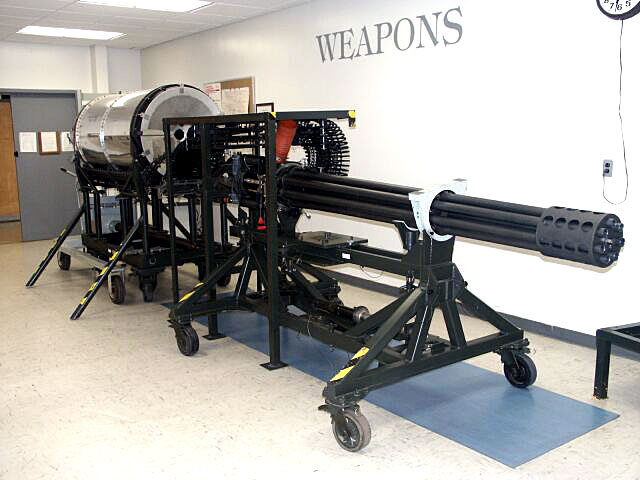 The force of the recoil could lift my car off the ground.
F

Put a seat on that gun with wheels and you could go places...

So what happened to the poor moose?
M

MasterBlaster said:
So what happened to the poor moose?
Click to expand...

I imagine he didn't go far. Looks like he took an arrow in the chest from 6 feet.
H

It was a quartering forward shot and not the best angle to take. His bow appears to be a Matthers and has lots of power to get through bone. But why risk a bad angle shot?

The moose was walking stiff legged and rocking back & forth...this means he is sizeing you up because you've just challanged him & he's about to charge!!!

Your hunting partner is 20-30 yards behinde you and is the one who calls the moose close with challeng calls, the shooter is the one to take the moose as it comes to the caller!

The shooter should have started to make some non agressive noise (like talking to the moose), to get the moose out of its agressive trance like stance and make it realize your not another rival moose, IMHO!!!

Once the moose reassesed its situation (fight or flight), it would have likely turned away and offered a "quartering away shot" for the hunter to take.

Getting a moose that close isn't the danger, its the mooses attention at the time the shot is taken that you should worry about! It should be on the caller & not the shooter!

The shooter in this vid is very luckey he didn't get killed. As far as the moose, the arrow entered at a bad angle in front (lots of bone etc), and may have only got one lung..plus it appeared to be a high shot.

I'll have to look at the vid again though.

When bow hunting, you MUST make sure of your shot placement for a quick clean, humane kill, out of respect for the animal your hunting!

HC
You must log in or register to reply here.

Is bugging out a realistic idea?
2