First one of these I have seen out of all the 500's out there now.

Another one just posted in my chainsaw repair group.

treebogan said:
Weaker than a 660 and bigger than a 462 is a solution looking for a problem.
Click to expand...

For 100 year old Beech it is just right.
Perfect solution to that problem.
We started cutting for the State Forest today, next 4 months we'll just be doing that.
The 500i is going to earn it's keep on those trees.

Heat could have vapor locked the 500i I test ran. This video shows heat causing vapor lock and the need to purge it.

You mean the bubbles?

Is this something new? I see that in fuel lines of most saws that is here that is not run on Aspen.

I think it just helps with hot starts. I don't know if the primer bulb on other saws purges fuel line vapor. I don't think so. They made it look like engine heat might affect the fuel system on that saw more than others, but I don't know.

You need the primer bulb to set pressure on the system when cold starting the saw.
Just like you need a fuel pump on a car.

I doubt it creates much pressure it just pull it up from fuel tank to be easier on the fuel pump as it takes a while for it to get it up. Left overs go back in fuel tank so its a fairly open system as far as I can tell..
Its nothing new from what I can tell.
Its easy to see if its hot fuel or vibrations that create bubbles. Just lift the lid and stick your finger in the hole. Had this discussion hundreds of times here when they say the fuel can't handle the heat and create vapor lock. Once they understand this is BS and see the fuel is not hot the real discussion begin and problem is solved.
Low riders=high vibrations=Vapor lock!

Not relatively hot, but still hot. I have seen gas boil many times when running in 100deg F heat. A 015 is terrible about it having a metal gas tank attached to the engine, but I can't remember if it ever vapor locked the lines. I guess it also depends on the carb design. In theory vapor should quickly and easily get sucked out of the line and pose little problem, but then there's the issue of fuel pumps only sucking a certain volume at a time, and a lack of vacuum that pulls more liquid up in the line like how a siphon works.

100f is 37.778 degrees Celsius. Not hot or boiling temp unless fuel is not suitable for use in chainsaws. Boiling temp of fuel is very different depending on quality.
If it boils at low temps chainsaw would not do well with it. Its often a saw sitting in the sun get quite a bit hotter than this.
I have seen fuel "boil" many times, but never seen it warmer than I can hold it. If it were warmer fuel tanks would get soft and stuff would break if it was hotter.
Mostly its vibrations that make the tiny air bubbles in fuel merge to bigger that look like is starting to boil as bubble go up, but temp and pressure is too low for the liquid to really boil.
Here we call it "oxidationsstabilitet" I think it translates to oxidation stability.
All fuel we have here to run saws on is above 75c in boiling point. Aspen fuel is In this temp the fuel would have great affect on materials around it as fuel tanks, rubber seals etc. It isn't much heat needed to make handle wobbly. It is not boiling from temperature being to hot, rather quality being too low.
"The boiling point of a liquid varies depending upon the surrounding environmental pressure. A liquid in a partial vacuum has a lower boiling point than when that liquid is at atmospheric pressure. A liquid at high pressure has a higher boiling point than when that liquid is at atmospheric pressure. For example, water boils at 100 °C (212 °F) at sea level, but at 93.4 °C (200.1 °F) at 1,905 metres (6,250 ft) [3] altitude. For a given pressure, different liquids will boil at different temperatures."

In short boiling gas needs pressure as it vaporize before boiling in atmospheric pressure.

It lacks a word in your last sentence :
In short, boiling gas needs negative pressure as it vaporize before boiling in atmospheric pressure.

That’s probably why my gas can kinda inflates like a balloon when I forget it’s in the back of the truck on a warm sunny day.
I miss the old gas can that just popped the little vent cap off if it pressurized.

Yeppers ! And they call it “progress” 😂

I've been super happy with my No-Spill™ gas cans. I'll say they work better than traditional cans. Pour fast, and can be stopped immediately. Well worth the $16 I spent. 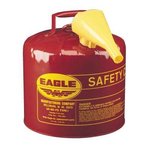 Actually, evaporation is a continuous process enhanced by the temperature. You still get some at very low temperature, but it just doesn't give enough gaseous volume to run the engine. Look at the water, it evaporates even in the ice form.
The molecules are always moving and bouncing against each other. At the surface, some are ejected from the liquid to the gaseous phase (and others come back in too). When the thermal agitation is sufficient, the liquid phase is broken and new surfaces appear in the liquid. That's boiling. "Sufficient" depends of the temperature but not only. The pressure, all the other molecules present in the liquid, the solid impurities, the tiny defects on the vessel's walls, a crystal lattice... all that has an influence. With some molecules like CO², in the right temperature and pressure, the molecules are so shacked but so constrained that you can no longer tell where the liquid and the gaseous phase are. A major change in the physical properties.

Boiling needs a big flow of energy to keep going, but it doesn't need that all the liquid is at the boiling temperature:
- The impurities/defects/crystals act as a local initiator.
- Some local pressure variations (vibrations, cavitation, shock waves...) put tiny volumes in the right conditions to boil.
- A small part of liquid a little separated from the main volume can reaches first easily the boiling point. You got that in the coffee makers and with the vapor lock (in the carb or the hoses).
- The wall itself of the tank can be hotter than the contend and put a very thin film of liquid in the boiling conditions. You see that easily in the modern electric kettles. If the thermal flow incoming is way bigger than the cooling effect from the contend, that boils.

@Frankie , they last pretty much forever tho, and are well worth the money.

Yeppers , one “wood” think the gas/mix oil just might last longer in a metal can than a plastic one ...

How do those metal cans do when someone lets it tip over in the truck?