In another thread, there was a brief discussion of using two lanyards while spur climbing, and I mentioned I only used one at any one time, but had a second to pass limbs and whatnot. Been giving it a bit of thought, and I'd ideally like to have a single centered line as the backup lanyard. My thought was to have a running bowline around the stem, and have it attached to the center Ds on my saddle. Problem is, I'm not sure that would work. A rough barked tree most likely would, cause there would be enough friction to grab the line and allow the running bowline to snug up. What about a smooth tree? Something like a beech or sycamore? I could see the whole mess going down the tree with the climber for at least a somewhat significant distance, and the stop wouldn't be pleasant if that happened.

Is that a realistic scenario? Is the whole setup stupid? The other alternative is making something like a tree squeeze. That's certainly doable, but is more complicated with more moving parts. Thoughts?

My climb line serves as my second that offers a bail option in case. Only had to use the in case once due to a wasp nest. Sure was a great option at the time.

Same here....climbing line does the deed of providing safety while unclipping lanyard to bypass a limb. Ideally I throw it WAY up and use it as assist while spurring up...or using foot ascender to just climb the rope.

I usually only used my climb line to safely advance my lanyard.

Last tree I climbed would have been difficult setting a line in from the ground. It was the spruce, and nothing but a rats nest of dead limbs the whole way up. I could advance a line as I went I guess. Make periodic wraps around the stem, so you'd have stops every x feet. That's something I've considered, but it adds complexity, and more stuff to get in the way.

Akimbo or hitchhiker let’s me choke the line and bail out if I need to. As long as it’s not really skinny I got no problem choking with the biner termination, I really don’t see it get loaded sideways, but could use a quickie or shackle if worried about it.

Can use it from the hip, like a lanyard or center.

If you aren't already, you need to get a climb line. You can "climb" trees only using a lanyard, but you will be extremely limited in where you can go and how you can get there. While you can get off the ground, going horizontally is almost impossible, and that's where the work often is. A climb line takes your weight off your feet and puts it on your butt, like you are sitting. While that seems like not a big deal (after all you stand all day at work) doing it all day in a tree will destroy your feet, legs, and back.

Sometimes you can't set a line easily, but bringing a climb line allows you to toss it up a few branches, and remove weight from your feet. This also allows more side reach, so you can reach out and cut stuff, tie off rigging, e.t.c. It also allows you to move around the stem easier. If the tree is right by a house or other structure, you might need to climb past it, and then when you have a really high tip you can drop down and go laterally. Going to srt can also help, because you don't have to isolate limbs and can redirect at will.

Smooth trees and skinny stuff are a problem in a fall, because they could possibly not catch you. You can mitigate this by using a full wrap, or a friction saver/tree squeeze thing. You can often avoid this going up by setting a climb line and just using the friction saver coming down, which usually suits me fine. If I can't set a line, i keep advancing my climb line as a go. A tree squeeze would be awesome on palms and stuff like that i bet, but I would make one with a wire, three stand, and a couple prussics with rings.

Yea, I have a bunch of climbline. Spur and rope climbing have always been segregated in my head. I'm either doing one or the other, not both. I really like the idea of advancing a line short distances above. That would have worked well on the spruce. More open trees are less of a problem, and the line could be set from the ground.

You need to end that segregation

A climb line is where it's at. All the videos you see with guys floating through the trees are all on a climb line. Watch videos where the climber puts a camera on a limb and shows their movement through the tree. Also start learning how to not use spurs, you can't use them on prunes anyways. Get a foot ascender, maybe a knee ascender, hell i even got a chest roller for my fat ass to hold me upright

That will make you even better when you can use spurs, because you will know how to move without it and the spurs allow you to walk everywhere. Learn to work leaning wood using the climb line to hold your weight while you walk up/out the limb, maybe using a knee lock and the bottom spur.

Wash, rinse, repeat.
Often, the rope bag comes with me if there are going to be a lot of limbs stripped that could trap the rope. SRT hybrid is the way to go. Hitchhiker is the easiest transition for climber that are more old school. 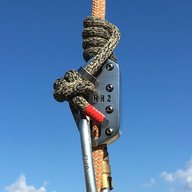 Do you climb SRT? If not start learning, it gives you great options for what you are talking about.

I don't climb much period. I got started in all this cause I had to remove dead spruce #1. I didn't want to disturb any nearby trees dropping it from the bottom, and spur climbing looked like a cool thing to do. Not the most judicious use of money, but you only live once, and all the spur climbing gear cost as much as a low budget local weekend vacation, so there's worse ways to spend money...

That was early summer. The spruce was gonna come down in the fall. In the meantime, I was thinking about it, and figured I had 80% of a rope climbing setup, so might as well get some rope, and see what that's about. Got a box of ends from cmcpro(got a lot of sweet rope cheap), and after some problems I wrote about earlier(my hitch seizing on a doubled line), I did it a different way, and got in a tree using rope only. Very cool! On spurs in the fall, the spruce came down with not too much issue(only dropped the saw once when it unhooked from my lanyard :^P ), and I got kind of hooked, but it's still an infrequent thing. Just don't have as much opportunity as I'd like.

Right now, my intention is to stick with drt. I like the simplicity, and I'm not climbing enough to really justify getting a ton of stuff to increase efficiency. I also tend to be anti gear in general. If nothing else, I think it's better to learn the old ways before getting into a lot of gear to improve(?) production.

When I got into whitewater paddling(open canoe) it was at a time when there was a large increase in accidents and death on the rivers. Kayaks and gear were improving at an exponential rate, and it was allowing people to take on trickier water than they should have been doing. It worked til it didn't, and they lacked the skill to handle the river after the gear took them farther than they belonged. That left an impression. I've always been inclined to do things the older/harder way, and that made me more distrustful of relying on technology to stay safe.

But, that's now. I've given up speculating on what I'll do in the future. Maybe it'll be srt. It wasn't that long ago I didn't even want a chainsaw. Now I have five, a mill, and a whole bunch of other forestry stuff. Who the hell knows what the future will bring?!

Climbing trees ime is very addictive, and when you start doing it more and more you might find yourself doing it for people, and then eventually just say eff it, get insurance, and boom lol

"If nothing else, I think it's better to learn the old ways before getting into a lot of gear to improve(?) production."

That would not be my advice. SRS systems are simple, versatile and not gear heavy. HH2 and a foot ascender will get you up a tree in SRS and you can switch over to (old school) doubled rope any time you want.

A rope wrench is awesome too!

Closer cinch to the stem with a HH.
But the RW is hella smooth.

I couldn't believe I could actually make money from it!

It has been a decent atm for me, but I'm finding i want more

I'd still rather have been a rocket scientist!!!

Thinking back, I wonder if I chose the wrong career. As a kid, I used to occasionally see guys in trees, and thought it was really cool. I was also big into climbing trees for fun(I guess most boys were. Are they still??). Somehow, I guess I forgot about it, and didn't consider checking it out when I got into working. I either missed out on the best career ever, or would have missed having a fun fresh hobby in my later years(burned out from doing it for money) :shrugs: You don't get any do-overs, so I'll just play the cards I have :^)

I was always intrigued with building towers, but then...

I always have a second safety and it's gets used alot. Many simple stems are killable safely this way. Also work positioning with two can find me a super stable perch.

To elaborate on what I said earlier, with the HH2 on your line, you can clip into your side Ds and use it exactly like a lanyard, giving you two for passing limbs while on spurs. You can have it on your harnesses center attachment and choke the stem. This is an easy way to advance and gives you a way down, even on a straight spar with no limbs, by just unclipping your lanyard.

You are having to learn everything anyway, why not learn a more versatile system?

My first 'rope wrench' was a piece of wood, per Kevin's advice. Then he started producing the RW zk1.

I already had a scrap of tether rope.

It's not midline attachable, but easy to disengage for DdRT.

People have been making their own metal
RW, including midline attachable ones... a strap hinge and some bolts and maybe some bushings, for simplicity.

Thanks all for the thoughts on supplemental rope for spur climbing. Some really good ideas there. I particularly like simply advancing a line a little bit at a time as you work up the spar. I may also make up a tree squeeze type of thing just to try it out. I already have everything I need aside from the metal, so it would be easy to do.
You must log in or register to reply here.
Share:
Facebook Email Link