It will sell for more, but you are simply wrong about strength. Aluminum is made hard by work hardening, rolling the plates thinner while cold. When you weld them, you actually are annealing the heat affected zone, greatly reducing strength and abrasion resistance. This is why aluminum weldments are made with much thicker parts than their steel counterparts. Also, the alloys used on something like a dump bed are far weaker than steel, and there's no al alloy that's stronger than steel. Some come close, but no. It's an awesome material, but not ideal for a dump truck

Weight savings with aluminum would save money in shipping/trucking, especially with large fleets, yet you hardly ever see aluminum aside from specialty applications. Tells me there's something people don't like about it. My personal non transportation experience with aluminum is it doesn't take a beating well.

That said, the aluminum Fords interest me. I don't use my truck to haul rocks or anything, and the non rust metal is appealing.

I have an aluminum body Ford, and i love it because the last 2 trucks i had the cab rotted out before the engine or anything truly died. I have noticed the bed is very easily damaged, i have at least one hole in it already and i baby it. No concern as I'm planning on building a bed as soon as the money and time thing come together. I was just about to order steel when i got laid off this last fall.

You can't layer the bottom with wood?

I was thinking road signs.

Here's my '49 International layered with plywood....wouldn't take much abuse...but wood can work.

MasterBlaster said:
You can't layer the bottom with wood?
Click to expand...

I have a heavy duty rubber bed liner in it, but one of my ammo cans full of welding rod tipped over and poked right thru over the wheel bump. The outside doesn't have a scratch on it other than the front bumper where i smoked a deer doing 80. So I'll be doing a full front cow pusher pipe bumper when I do the bed, so the next one i hit will probably hit anywhere but the bumper lol

Here's a kranman trailer, with a loader just like I'm thinking. This one locks into place which would be handy if you are skidding logs much. I guess they were designed for thinning so i imagine they can move a fairly good amount of material. Do any of our European logger guys know much about them? @stig ?

I'd want two more feets, but that looks quite doable!!!

That looks like easy enough to build Kyle, simple really.

Bob, I'm thinking so too, but mine will be self propelled, and thinking of doing a pto conversion on the winch, shown here. Any tips on that let me know!

Oh I'm definitely gonna have stabilizers on it boss, manual ones of some kind. Here's a vid of that exact model, with guys loading wayyyyyyyyyy too long of wood and going very slow because of it.

SeanKroll said:
As another AT thought, along with orchard ladders' feet, I duct tape the foot of the AT, if I'm going to work on something that can be scratched, exposed pebble aggregate seems like it would show a mark really easily, along with decorative concrete.

That bit of protection would make me more comfortable loading more per trip, because it takes the scratch-potential out.

Maybe you can have the first AT with a hand-brake, since your crafty. IDK how much you have hills. Are you in a river valley giving your some vertical relief, or is it typical flatsville IL?
Have you seen the electric motor, radio control faux-AT?
Click to expand...

Sean, very good tip about padding the foot, never thought of that!

And no i haven't seen the video of the modified at, would you please post it? I can't find it

Maybe the winch manufacture could source an adapter for a hydraulic motor.

Kyle, I have absolutely zero experience with stuff in that weight class, sorry.

An hydraulic system would be so handy, with more functions allowed than the purely mechanical, too bad we are loosing the KISS principle.
Kranman makes some very attractive equipment with self propelled trailer, small hydraulic crane, stabilizers, winch, all in one unit.
But it looks bulky, heavy and pretty sure costly.

Very well put man, I'm agreeing that complexity is not what I'm looking for here, and my wallet agrees too

the last video was a kranman as well i think, I'm pretty sure they have all gone to hydraulic grapples on everything now, but a simple crane one would be a pretty effective improvement to my operation. The dedicated small forwarders seem to be simply miniaturized versions, complete with articulated steering, forestry rated cabs, grapple arms, bogey wheels, e.t.c. While I'm sure they are ideal for actual forestry operations, a small tree service doesn't need all of that.

Here’s an el cheepo I found 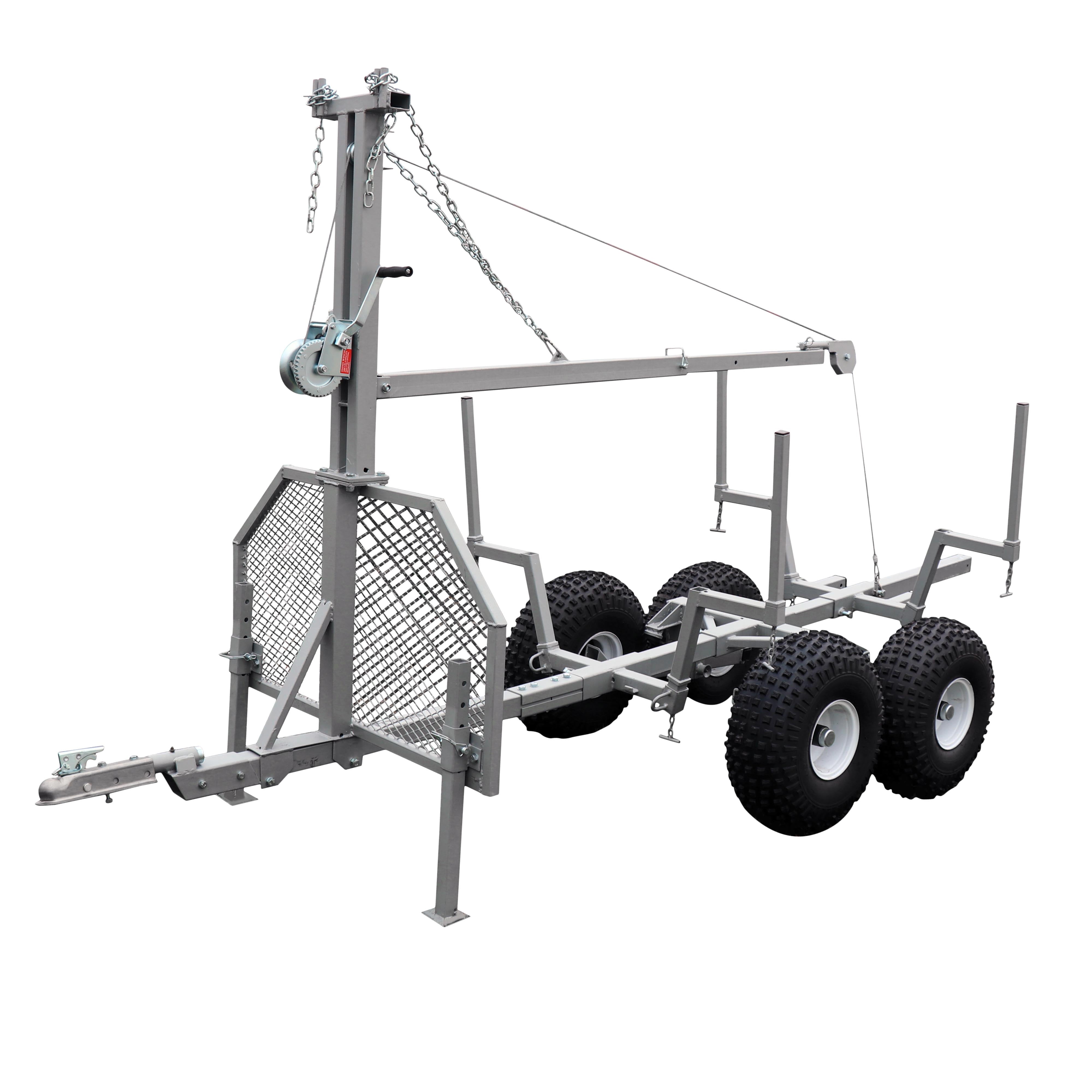 It might last a couple months if you baby it!

Causes cancer and reproductive harm also! Well, only if you live in CA. I'm safe!

Wonder if anyone's considered they made a mistake with that law? The warnings are meaningless. A carabiner carries the same written risk as benzene.

It is made by titan implements, which are a very large implement supplier, so I'm sure it is probably decent for a homeowner. I'm planning on one that's self propelled tho, and a bit more substantial.

What length do you want to make it approximately ?

The forestry trailer with the quad is way too long for an urban area. The work zones where I could use it are extremely rare. Even the transport would be a big challenge. I have to load it in the back of my van (for my present setup) and that's only 34" x 78". My chipper fits in, but barely.
I think about a pocket size loader /transporter for many years, but I came up with nothing practical, yet. Let's hope ...

It would be nice to have a capstan on the winch, like some utility trucks have. The bucket truck I used had a capstan in conjunction with the hydraulic winch, mounted in the front bumper. Don't know if its always with a hydraulic winch, or if its possibly to adapt to an electric winch.

I'm thinking about 8 to 10 foot or so, not too much longer than a mini, and hopefully about 34 inches wide. A couple feet for the engine and crane base, the rest for log bunks. The logs will overhang the back end, where the drive wheels are, so the traction problems associated with a trailer are removed. Basically acting like a truck rather than a trailer where the pulling implement has to be a significant percentage of the weight of the load, and a truck gets better traction as you add weight. Turning around wouldn't be an issue because you would likely just drive in reverse because the branch tips would be out the back, just like the at.

@Marc-Antoine, although I'm planning to chop the axle to get it to fit through a 36 inch gate, I'm not planning on a light or small thing. I'm likely going to be using some 3 inch pipe for the crane and backbone, a bunch of scrap pipe and angle, and maybe even making the motor and winch as a skid unit so i could use it on a crane on the trailer for front yard trees. If i do another crane on my trailer when the job is done i can just pile the contraption on top of the logs on the last trip. I'm trying to get something that will come close to a mini skid in production, and be able to keep up with a lift when i rent one. If i could do 5 trips an hour at 3k pounds each, i think i could come close. That would be a 12 min cycle time, which is doable i think. Doing that with an arbor trolley and a log arch is almost impossible imo, not mention my current method of loading is using a duct hoist, while decent is still too slow for me to grow.

As far as the winch goes I'm thinking of pulling the electric motor off and getting a sprocket to just drive it with the engine. It's sold as either an electric or hydraulic, but the electric has severe derating because of the electric motor. Electric winches are designed to be used intermittently, and I'll be running it as fast as it can go for the entire time I'm moving stuff, so I'm thinking going to a pto will be an improvement. It's a worm gear winch, Ramsey, 8k rating, 3/8 cable, with dog clutch for free wheel. I could use the gear drive to change speeds if needed, because I'm planning on using the belt clutch that the mower has. A simple belt clutch could also be used for forward/ reverse action, on both the drive wheels and winch, and would be simple to add and would only have to be built once for both outputs.

@SeanKroll i agree a capstan winch would be awesome, but i don't really see how to add one easily. Some winches have them built in on the end, and a dog clutch disengages the spool winch section so you can use the capstan. The winch has to be designed for the end load, and i don't think i can do that on this one, but I'll check in a bit. It might be a bolt on thing, but i can't remember, some allow that but have a longer shaft to accommodate it. If it is in an accessible location and has room for it i might weld a flange on it and then add one. They are called a bayonet capstan or something if you are specing out a winch with one.
You must log in or register to reply here.
Share:
Facebook Email Link