MasterBlaster said:
If he woulda just looked up!
Click to expand...

I can't imagine a hard hat doing much against an overloaded crane boom. That dude died by doing something he had no idea how to do. How's people like that get ahold of equipment like that is beyond me.

Well, it appears anything goes in those third world countries.

Tree09 said:
I can't imagine a hard hat doing much against an overloaded crane boom. .
Click to expand... 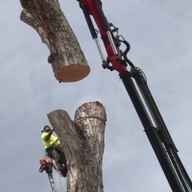 No way a hard hat is helping. That stick came down with gravity. F=ma.....that was off the charts. His neck severed instantly. Physics at work here. Crane got levered...that piece shockloaded it then toppled it. Madness. I do cranework in a 3rd world country that shit not flying with me.

The only thing that could've saved him was dropping 2 feet or so before he was struck.

So too big and heavy a piece, or do you wonder if they had outriggers sunken a few feet into soft ground afterwards?

Biggish piece I guess, but we know fuckall about the cranes capacity, distance, and the ground it was sitting on.

I'd have swung to the side... never taking my eye off it, especially after seeing the hook coming down!

I have seen a crane's outriggers sink before, it went to the edge and he was able to get it down quick enough (dude had no business in a crane and the outriggers sank in asphalt on a summer day). We were unloading a small but very heavy tank off a trailer, and that was the only thing that saved it. I was an apprentice at the time so someone else was in charge of the whole operation, but when I saw that outrigger come up I screamed and was in the next county before it even hit the ground

Working on dirt and residential yards means you need to have proper pads erroring on the side of caution. On doing ditch work, no matter what the soil actually is, most companies have said that you call it loose sand and so every precaution is made treating the soil like it was the worst possible condition every time. This of course is a pain in the ass but no one will ever be killed in a cave in so they consider it worth it. I have come to the conclusion that outrigger pads should be treated the same, takes one variable out of the equation.

As easily as that crane tipped over (no hesitation at all coming down), i would also guess that they were waaaaay over the capacity. Crane's are rated for x amount at y distance, but they don't have a safety rating allowance like the rest of the rigging does. On the last job i was on, they were debating if they should attempt a pick that would be approaching a critical lift, and they wisely decided on switching to a bigger crane so there wouldn't be any doubt at all. With the stakes that come with running that big of equipment, living on the edge makes you dead like this guy.

So basically no one involved in this entire video had any friggin' business doing that kind of work. Now some kids are gonna grow up knowing that not only did their dad die, but it's on YouTube and he was a dipshit.

It's a brave new world!

Maybe he had no kids?

Maybe he had kids and they grow up and do the same thing. We live in a crazy world where folk just do crazy shit without thinking. Hope this is not the case obviously. But how could this guy be convinced that cutting the tree from there was a good idea.

i've sunk outriggers on pads about 3' evenly(still scary) w/crane close to work; thus say:crane only as good as the ground it stands on.
.
Seems piece too big for a static, vertical pull(but hard to tell).
Let alone leveraged angle, increasing in to impact.
I look at angle of boom to work, rather than distance.
Would seem crane reaching over building, would seem low angle.
Should never impact crane, straight up , clean only.
.
i'd hope any crane operator would only pick straight up on static target, CoG below choker.
>>anything else gives multipliers of weight against crane.
>>no telling size of crane/capacity; if experienced operator etc.
.
To me, on this, it would seem fairer if Darwin came and got crane operator as the injured party thinned from gene pool.
.
You must log in or register to reply here.
Share:
Facebook Email Link