picked up some old saws a few weeks ago got a jonsereds 70E, Mcculloch power mac 6, and a Lombard AP 420 was wondering if any of the collecters or the guys that have been around the block a time or two could give me a little info on them, I looked them up on the net and got a little info but not much. the jr70E just got refurbished in my garage gonna fire it tomorow (fingers crossed) the mac and the lombard have been sitting for some time so will probably have to dig into the fuel system and get a carb kit or just soak them in solvent. but any way would like to here what you guys think about these saws and get a little info. THANX

The Mac is just one model of the infamous mini Macs ..Most of these little saws have oiling problems which is why they get shelved.

The Lombard is one of the AL-42 series Al= American Lincoln,one of the many manufacturers of this saw. There were several .

It's a take off of the Homelite Xl-12 ,one of the most copied designs of all times .4.2 cubic inches,single piece connecting rod ,much like Stihl uses . Chrome cylinder ,semi closed porting ,much like a Mac 10 series although with non ported piston .Considered to be rather fast in it's day .

Be praticularly vigalant on this model as they are known crankcase seal leakers .Fact is I have 2 or 3 in the shed that got fried from bad seals .

These saws were sold under varied names ,AP-42 ,Commango ,Lightning and Lightning II but they are all about the same .The later models had auto oilers which worked so-so .Most of them eventually leaked oil into the crankcase causing them to become mosquito foggers .
H

What I know about a J-Red would fit in a thimble . I've wrenched on 3 in my lifetime .Those were pretty good saws though ,two 60 CC models and one 49 CC little saw .They all ran good I'll have to say that .
H

I rebuilt a Jred 70E a few years back. For a 69cc saw it will run like a scalded dog. I had a 28" bar with full skip chain on it. It cut the PNW hardwoods great with that combo. Great old saw. Wish I still had it.

With the big weather event in the Midwest, a low pressure system disturbing things up in Minn. causing high winds in the Midwest that pretty much shut down any high tree work. It was a good day to get started on some pre- winter maintenance like oil changes on some trucks.

The chainsaw bug also bit today. Picked up these two relics six weeks ago from a guy who needed some quick due to the economy.

How would you like to cut wood with these saws???

One saw is a Mall 12A with a 9/16ths pitch chain. BIG cutters on this one. The other saw is a Homie LCS. Both saws are dated to around 1951. Both saws also have float type carbs. If you wanted to get a stump down lower you would have to turn the bar sideways with that lever release by the top handle on the Mall, for the Homie you would turn the handle at the rear to turn the whole carb . The all position carb wasn't available when these saws were made. I had always heard the old timers saying this about the carbs on old Homelites but this is the first I have seen.

If you look closely you can see what I am talking about. I goofed a little on the Homie pics . I loaded them a little out of order. I don't know if I will ever get them running but they are different.

Well since you mentioned it ,I do believe I have one of each myself .Of they don't run which is par for the course .I'm sure they must have at one time though .

Wonder what that slot at the end of the bar is for? A helper handle doesn't seem so pertinent with that short length.

To hang it up on a nail perhaps .Really I have no idea but a lot of old bars had something about like that . Fact a lot of old Mac bars had a round hole on the end .

Good eyes, I never noticed that. 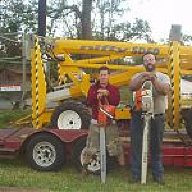 I started cutting trees about 16 years ago with a Mall similar to that one. Sitting in the back room up in Ohio now. I really need to get it down here just so I know its here.

Using a Mall of any model number is kind of a work out to say the least .

Picked this little gem up last week. Runs like a raped apre. I little McCulloch 2-10. 54cc powerhouse. Tuning the Mac "Bullfrog" carb is a PITA.

That's just a "baby " flatback on that thing. Still a pain in the arse as well as being a right hand start .

I had some mac's for awhile. Never seen a carb like that one.

I don't know what the hell was wrong with them for a while .They had good Tillotson and Walbro carbs and built left hand start saws then all the sudden they had a dumbass attack .That only lasted a few years on the flatback type carbs and right hand start .Evidently they fired that bunch of engineers .

My dad inherited a Homelite XL-12. He had to jury rig a fuel line but got it running and got me to sharpen the chain. I cut a cookie and was quite impressed but was unsure about oiling the chain. What is the rule of thumb (pun intended) on manual oiling during a cut?

I push the button a LOT.

Probably pump it a bit between cuts to clear out the groove with some throttle 'blips', and get some more oil to it.

Oldie for sure ... Mebbee once a year at the Fair. Be tough to actually run that all day long

Do you have a mental catalogue, a written list or are there saws in there you may have completely forgotten about?

I have a pretty good list and know, or rather knew pretty good were stuff was. Saws has been in and out of shelfs to shows and so many has been involved in this its not easy anymore.
In List I have all saws in collection (I may have missed adding some, but not more than 50 or so) Brand, model, were they are physically, serial number, who I got it from and notes if there is something special to it like prototype, complete with box tools etc, factory saw or assembled from parts.
I have a list of saws that been here (and left) were I move them from collection list to and who has it now.
There is 70 something brands in list..
You must log in or register to reply here.
Share:
Facebook Email Link