We had some fun rigging out this easy 4 trunked dead pine last week.

Mickey has only worked with us a bit...he's a top notch arborist...has worked a lot with my pal Eli, and Dan Kraus.....he excells at pruning, but does well with removals---and he slutted and posed a bunch for the camera, I'd say:


and a coupla teasers...
After felling the first of 4 trunks Winched this lead up and out whole, gotta love the GRCS Next, we tip tied, picked and lowered two or three sections aloft, then did the same with the butt. (Last, we free dropped single or double rounds of the jin pole spar.) I'd left our static line at home, but the 1/2 inch old double braid did the job with nary a whimper---woulda been nice to have had the no stretch (and stronger) line..but hey....somebody get me a reminder electric prodder, eh!? Had three craiglist firewood folks show up and take all the wood, which was great. I'd had to lower my bid to meet a low-baller...but no big deal. The job was $1500----and I mostly took pics, I did rig out the last two picks then chunked down the spar. Job was about 14 manhours plus a bit of my time on the "real" job. No dump time, as someone showed up and took the chips-- two blocks away, gotta love it!
Then I ground some stumps with my little Alpine Magnum, and the guys did another job, which I helped finish....A $3000 day will never cause me to develop tummy pains!!! and the other job was low bid as well....

Great pics, Roger. That loose rigging in the 6th pic spooks me a bit. What was the weird 2nd undercut in the 3rd pic?

nice shots roger! the butt hitch photo is kinda spooky as you can see the hitches get some slack

Normally (with a running bowline) I wouldn't worry so much about it, but using a biner for that... nah. I don't trust a biner when some slack might be involved.

i use steel biners like that for rigging also.

MasterBlaster said:
Great pics, Roger. That loose rigging in the 6th pic spooks me a bit. What was the weird 2nd undercut in the 3rd pic?
Click to expand...

I agree...but the tie point was about level with the block. a marl would have been better than a half hitch....and lose the biner...but the wood was dead pine, so pretty light.

The second cut was to aid in getting the lead off the stump. It hung a bit. He didn't cut it 100% through, I think.
B

I can't believe that carabiner didn't break in pic's 5 and 6! I've spoken with dozen of people now whose carabiners broke in this exact kind of rigging situation. Shock loaded force applied to the side of the gate on a smallish diameter trunk is what seems to do it. Anybody here ever had one break in this situation?

Sean, I use steel carabiners for rigging like that all the time. Side loading isn't nearly the issue that some make it out to be, especially if you're aware of it and place the carabiner accordingly. And ALWAYS make sure the load is along the spine of the carabiner, not the gate side. It's not a good method for people who have to be repeatedly shown how to rig it to minimize side loading but it's fast and safe for those of us with analytical minds who can visualize how the load will be placed on the carabiner.

Several years ago when I first started rigging with carabiners I broke exactly two, both were aluminum. I haven't rigged with an aluminum carabiner since.

Bounce said:
I can't believe that carabiner didn't break in pic's 5 and 6! I've spoken with dozen of people now whose carabiners broke in this exact kind of rigging situation. Shock loaded force applied to the side of the gate on a smallish diameter trunk is what seems to do it. Anybody here ever had one break in this situation?
Click to expand...

Bounce, that's a 50k rated biner..and there's a half hitch taking some of the load, which was 150 pounds (actual weight)at most, and let run. Even so, I usually run the clip around the line and clip back to itself(which Mickey didn't do), this reduces the load on the biner by half again.....and maybe use a marl or two half hitches, which further reduce the load.

and, in pic 6, there was minimal shock loading as it was lifted/swung off.

When the load get over 300 pounds or so, I lose the biner. Been using them in these scenarios for many a year.....


understand the concern, however....

Bounce said:
I can't believe that carabiner didn't break in pic's 5 and 6! I've spoken with dozen of people now whose carabiners broke in this exact kind of rigging situation. Shock loaded force applied to the side of the gate on a smallish diameter trunk is what seems to do it. Anybody here ever had one break in this situation?
Click to expand...

the only time ive seen a biner break was on one (kong?) that had a black potmetal(it seemed) lock and the lock broke, not the biner. i use heavy steel biners all the time and other than that one instance (trashed the rest we had like that one) ive never had even a close call

Irrespective of the rating of the biner, they are not constructed to be side-loaded (bent) hence I only use them in conjunction with slings for rigging. Saying that if the half hitch or marl takes the weight, then i can't see a problem

i guess i dont see very much side loading. looking at that las pic shows the position that they usualy are loaded. the weight seems to be along the spine for the most part.

the spine is being loaded laterally in those pics

pete mctree said:
the spine is being loaded laterally in those pics
Click to expand...

sure, Pete, maybe 15-25% of the load is lateral....that is, the portion of the load that is actually transferred to the biner, which is very minimal when rigged the way I teach my crew. I didn't see what Mickey was doing or would have insructed him to do it the better way. The way Mickey rigged it, and on smaller diameter wood, the side load would be higher.

I know that a few times, I've rigged stuff a bit too heavy.....but also checked the tension on the biner...and it is minimal compared to the load...even considering what the dynamic loading could have been.

In my non-scientific (or backed up with dynamometer evidence) I'd venture to say that the peak force on a biner of a properly tied setup would never go beyond 1/4 of the total load, as it is spread out, starting at the marl. So, say a 500 pound load is butt hitched, and let run a fair bit, applying 3500 pounds on the rigging point, and 1750 pounds on the load. That is about 450 pounds on the carabiner. Now no more than 1/2 of that would be a side load force, I'd say. Now tell me, do you really think that would break a 50K rated biner?

And that is worst case (well, besides a snafu such as snubbed load which could apply 10x the force on the rigged load), I think. As well, i've never butt hitched a 50 pound load with a biner termination, and won't.

Part of my reasoning is to offer, that hard and fast rules, such as one handed chain saw use, and this new OSHA bs ruling, while they may have merit, aren't necessarily the end all. 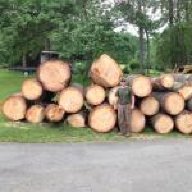 Bivy,
put an ad up on craigslist for free pine wood. I had an ad up early in the spring and people were kickin my door down to get some. I never asked what they were going to use it for though.

hey, in a wood stove, pine burns fine, hot, and maybe not too bad for creosote buildup. Of course it's btu value is low.....

Of course, I avoid it....what with having plenty of great woods to choose from, all free.

Nobody around here burns it at all.

Great photos!, hardwoods only up here, pine nobody no way

I use steel biners on pieces that will swing free. If the piece is going to slam into the rigging spar I take off the biner and go back to basics.

On the pine issue, we have set up clients that need wood due to their income (or lack of it) and they will burn pine. So we have a network of who is closest. Pine goes there as a donation. This includes some non profits.

I cant imagine why anyone would stay ties into a spar that is being used to block a chunk of wood down.
maybe after a couple pieces where the load is from above .
Why not just un hook from it , block the wood and then hook back in for manuverability.Guess it was a real solid spar.

I can see it if the load isn't that heavy, but I can also see retying, sometime.

MasterBlaster said:
I can see it if the load isn't that heavy, but I can also see retying, sometime.
Click to expand...

I always slack my lifeline, in that situation. It appears Mickey did the same.
B