For some small projects. What is the best way to dry wood? Let it dry in log form? or cut the rough shape out then dry it?

It will dry faster cut into lumber than it will in the log .

wood won't dry as a log so yes you have to cut it or split it to get it to try. What are you trying to do??

Rough tables and benches. Is my current project. Last tabletop I attempted, Cracked down the middle.

Maybe Jay can give you some tips.

To dry a big slab of wood properly takes a long time .It might be such a thing as to slobber it up with anchor seal and let it dry slowly over a period of years .

I attempted this method on a 54" slab of soft maple I cut for friend of mine 12 or so years ago .It's been about 5 years since I've seen it but at that time it had not split .My pal suffered a stroke and I've not seen him or the wood since .Poor guy it went into a form of dementia just like my father .

Trivia: Years ago they used to pour linseed oil in the top of "Cigar store Indians " and other carved figures to prevent them from splitting .There might be a method to preserve the wood with some type oil treatment but I really cannot say .

Also what is the best way to dry a cross cut section? I'd like to make a table like that from a 5'-6' diameter round? 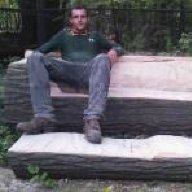 Willie, I have been trying to dry rounds, they always crack. I would really like to know how to get them to dry successfully.

If the wood is a species that will want to warp or crack a lot, you are better off keeping it on the log form for a time to lose the initial moisture while the movement is locked up, then sawing it will usually give more stable material. Taking off the bark can help in keeping out the bugs. If you only need smaller stock for something, movement isn't such a problem. The majority of woods that are known as suitable for woodworking, you can usually saw up quickly, but better to take movement into consideration, and have oversize thickness from the saw, and additional length for cracking. Air drying outside, but before beginning the project, bringing the wood inside will have it usually drop another percentage or two in moisture content. One or two points can make a big difference, stabilizing to the atmosphere. Not a bad idea to rough out your parts when you bring it inside, but even something that has been air drying for a number of years outside, can get some end checking, especially if a breeze through an open window or something, contacts it. Slow procedure is the best, bring it inside for a couple weeks, then rough the parts out and have them sit like that for a bit more time. Leave some extra length. Many times you can get away with making finish parts immediately after bringing inside, but it is a little risky, and if you aren't in a hurry, cut the wood some slack and let it do what it wants to do. It refuses to listen to commands is something I learned a long time ago.

Rounds are tough to dry. I think the best way is to completely cover them with a sealer to way slow down the drying process, and have them sitting inside with minimal air movement. Dry as slow as possible. Some day when you remember that you have them, you might find that they are then dry and haven't cracked. If that doesn't suit your needs, one slice from the outside down into the center, will often allow the movement without cracking (much). It's the way timber framers will sometimes use greener lumber, put a saw kerf into the wood that will absorb the expansion, then often fill the gap in later. If they are real nice rounds, I don't think the slice is so bad, if it's the only way you can get something without ugly cracks. I don't think I would fill in the gap on a round...maybe if it could come out looking ok.

Moisture in wood is a real nemesis, something only time to dry without question can remedy. Slow drying can allow success when the fibers have an easier time of it adjusting to the transition.

I have read that cutting rounds at an angle, the steeper the better, helps with cracking. I have cut some large thin rounds(46"dx4"t) for a guy 7 years ago using that method and they still have not cracked. Also soaking the wood in ethylene glycol (antifreeze) works but is very expensive.

I would have mentioned polyethylene glycol, but I don't think that it is practical....or even possible, with larger material. Cutting at an angle is an interesting idea. It seems like it could allow for a bit more wood contraction without cracking. I don't think I would take it to the bank before trying it with what you have. Every wood has different degrees of radial and tangential movement. Consulting charts can be a help in telling you what you have on your hands. Walnut is a pretty easy wood to dry without a lot of warp or cracking, for example.

The glycol route is indeed impractical unless you are flush with cash to burn. It was silver maple that I cut, so far so good, but then again I am by no means a wood worker.

They have speculated although nobody really knows that Stradivarius used some type of water soaked woods in his famous violins along with other concoctions for preservation and tone quality ..http://en.wikipedia.org/wiki/Stradivarius

Of course such high priced master pieces are treated as the rare gems they are however he must have done something right because they still exist today with no cracks .The old boy took the secret to his grave because they've never been duplicated .

It's only speculation on my part but I think the secret is replacing the natural moisture in the wood with something that for all intents will not evaporate .Creosote ties will only split a little on the end grains although it would make piss poor furniture unless you lived in a barn .

He probably had an exceptional eye for material, some wood is docile, but other stuff appearing similar has it's own mind about things. He also must have lived in or provided a good environment for woodworking. If he had lived in Western Oregon, and then sent a violin to Arizona, his customer could very well of had problems.

Is that why your wife married you, Willie, 'cause you can keep a conversation going? Better research if glycol is the same as polyethylene glycol. It has to get absorbed into the cells, I dunno about a big block like that...?

Coolant for my trucks... I'll look, any other tips? Would a ratchet strap around the circumference help any? A buddy suggested oil, I said "linseed?" He said "hydraulic"

I think it was more my cooking skills that did it..

I don't think it could hurt, and cinch it up every now and then. If the glycol isn't usable, then I would take some white glue and thin it a bit with water, then smear it thick all over the round, every surface. Keep the air from contacting the wood. Maybe take a peek in two years. How thick is it? A moisture meter that you can stick some prongs in with, would be useful telling if the water is disappearing. I would say that in your area, if you can get it down to about fourteen percent, you are home free. Polyethylene glycol will leave a waxy surface I believe, and permanently, I don't know how that would be for a table top. Probably good information on the web about it.

I haven't cut it yet, any advice on rough thickness I should start with? I think I would like to end up with 4"-6" thick. Would a kiln be a good idea or bad?

Good question about the thickness.... It both occurs that thicker could increase the tendency to crack, and also help prevent it. How about an inch and a half extra on each side and go for broke. Gee, a kiln for rounds.... Normally, kilns create a rather hostile environment for wood, and that is the reason that wood is generally air dried for at least six months before putting it in a kiln. My guess is that with the greater tendency for end grain to want to crack, and something that can easily disintegrate like a round, I would guess that a kiln would tear it up. You are talking about taking a very wet piece of wood and driving it down to 6 or 7% in a couple weeks, at least with normal kiln procedures. Even with regularly slabbed wood, loss in a kiln is not uncommon.

So I will shoot for 7" thick, better hone my bucking skills!

Now that I hogged Scott's thread....

Here is a crazy question. If I set a table round out near the garden( whichgets watered everyday). Could I relieve some of the cracking by it getting sprinkled everyday? Was thinking the sun would bake alot of the moisture out especially if it was elevated.

It's been mention on the web of bowl turners using a solution of dish washing soap .Another boils his rough turning stock one hour per inch of thickness to minimize cracking . Any method used they all say that totally preventing cracks would be akin to redesigning the wheel .

I have tried Polyethylene glycol on a 4½ foot dia slice of lark once. Worked fine, but took forever and cost a fortune.

After handplaning the dried round and running it through my big sttionary sander to 400 grit, it looked OK.

I came up with a solution to the tangential shrink cracking once, Jay.

Cut two slices ( rounds) right next to each other and make a mark on the bark, so you can realign them to their original position later.
Then make a saw kerf all the way to the center on each, but at opposite sides.
When they are dry, you clean up the by now "pie slice" Like crack on one round, and cut the identical piece out of the other to fill it with. Because they are virtually from the same piece of wood, there will be almost no grain difference.