Been keepin' up with a thread at TB on the Blake's.

At first glance it looked like the way I learned it. Tying it yesterday I noticed I do it different.

The first pic is how I tie it, second is how some folks tie it...including some tutorials (correct me if I'm wrong).

Is this old news?

Is there a difference?

I believe that the second way is how the "Tree climber's companion" shows it. Book's at the shop, have to check it.

I like it! No reason it couldn't work, just passed under the bridge the opposite way. Cool.

It looks to me like one is just a mirror image of the other. Never mind, I see now, I tie it the second way.

I never climbed on a Blake's hitch, used the tautline for many years then went to the VT. I couldn't tie a Blake's hitch if Mr. Blake himself showed up to instruct me. But if it has Jerry Beranek's blessings then you're golden.

Can't say I've ever been a staunch user of the Blake's, but between it and every other variation of friction hitch I've seen, it seems to me that no matter how you wrap a rope around another you end up with some kind of a friction hitch.

I never liked it because you can't tie it one handed.
N

The Blake's in the first pic is called the "Sui-Slide"; it's tied wrong. When loaded, you'll find the second one holds much more.
T

yes as is the same at the Buzz.

Yeah, in the first pic the tail wasn't passed under the bridge. I miss that. Thanks for pointing it out.
N

Wouldn't know, Kenny... I can never get into the Buzz, and frankly, don't care to.

The first is named that for a reason. Namely it can pull apart.

Besides that, it offers no advantages unless you're trying to kill someone.
N

gf beranek said:
Yeah, in the first pic the tail wasn't passed under the bridge. I miss that. Thanks for pointing it out.
Click to expand...

NeTree said:
The Blake's in the first pic is called the "Sui-Slide"; it's tied wrong. When loaded, you'll find the second one holds much more.
Click to expand...

Had a climber show me that 1st. knot about 10yrs. ago. Glad I didn't climb on it.

I end up using a taughtline in the tree, but like to try out others fur the heck...

What are you climbing on now?

He said he's using the tautline.

Knotta- try reversing the top two wraps on your tautline so it is an open prussic. This pretty much eliminates the 'hitch creep' so your knot won't roll out on you.

Lousy picture, but zoom in on it and you'll see what I mean.

I was going to add that using a split-tail is a huge step up for extremely little investment.

That's the way I learned, then later I sent the tail to the outside. It was easier to tighten it up thataway.
K

Started with the Taughtline and a 13mm, used the Suislide a few times (recently too!) but went back to taughtline

I use a 10mm rock rope and tie a figure 8 at the anchor and at my saddle.

But I only really climb trees on the weekends on my own.

Pullin' brush one day a week with my uncle usually.
N

Most rock ropes have a much smoother, slicker jacket.
K

Knotta- try reversing the top two wraps on your tautline so it is an open prussic. This pretty much eliminates the 'hitch creep' so your knot won't roll out on you.

Lousy picture, but zoom in on it and you'll see what I mean.

On that suislide ya gotta get familiar with how your weight's pull on the loaded leg of the tail can power the bitter end to rotate around and loosen the worx. Also, then there'd be less than a round turn trapping the bitter end at sum points i think.

A round turn is soooo much better than a turn. It's more pressure and gives a double secure grab too. Going from 1 version of a half hitch to an anchor hitch is 1 example of increasing the turns from a simple turn to a round turn. To me, all mechanics. 1 turn can about take all the load, but 2 (making a round turn) gives a 2nd turn that can then snub out the remainder of the force from the first. Also, the round turn has more of a choking coil effect that out weighs just the 2/1 effect and friction distance of a simple anchored turn. An example would be a turn around a tree, vs. a round turn around a much smaller, slippier textured Porty for holding power. 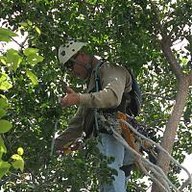 Wesspur (last year?) in their catalog mistakenly showed the Suislide when they meant to show a Blakes.
The story is actually a little more interesting because there are two forms of the Suislide, and one of them actually works better than the Blakes. I tested this knot for a couple of hours when people first started remarking on the catalog error, and quite by accident tied the second form of Suislide. The three knots are shown below: Blakes, standard Suislide, and modified Suislide (labelled W2 for Wesspur 2).

The only difference in the two Suislides is that the tail is pulled hard over against the bridge to form the good configuration. It is just a conformational change, as the knot is exactly the same, but this makes all the difference. I found the W2 was a dream to descend on, as merely pinching the knot from top to bottom would start a smooth descent.

I am not at all sure the W2 conformation is stable under working conditions--it would be a drag if it spontaneously switched to Standard Suislide.

I don't see how one could trust your W2 to remain stable, as you posited.
You must log in or register to reply here.

P
Long question from a newbee

What hitch for lanyard?