I miss Woodworkingboy ??? I don't know what ever became of him ?
This is a cupboard I made about 15 yrs. ago. It is AA clear pine, & I'm quite proud of it. In case it looks like it was easy to build >>> it weren't !!!
Mortise & tenon joints on 90% of it, lap joints on the sides (the wider sections).
Have you got a project you'd like to show us ?
I know Wes (Koa Man) did a lot of his own work building his new house.
It'd be nice to see watcha got !

Nice, I could never even attempt something like that!

Here are some from my kitchen remodel. Sadly, the entire house still sits unfinished... in various stages.

As far as cabinetry type stuff, I haven't had much time to enjoy that recently. Heck I've even been out of wire on my welder for over 6 months and haven't had time or a need to reload it.

So a few months ago a TreeBuzz trade happened. Fellow Buzzer Javier (jf192 i think is his screen name) had some slabs of acacia that were cut down at his place of work...the San Diego Wild Animal Park. He offered them to me in exchange for some splicing. I did some used Fly, Poison Ivy, and maybe a few other things and in exchange I got 3 pieces of what I'm sure is Acacia melanoxylon. Each was about 6' tall, by about 24" wide, by about 2-4" thick.

They were cut with a chainsaw, so they had some pretty rough marks on them. I took them to a local shop where they were able to plane them for me. I ended up with some mostly smooth, even thickness.

A friend of mine has a pretty good woodshop. He turns bowls daily for a business. He let me use his tools. Some of the boards were splitting pretty bad:

I started by cutting the boards to about 7" in width, basically cutting the cracks out. Even though some were about 2" thick and others were closer to 2.5", I joined them all together, creating a slab that was 6' x about 28".

I sanded, sanded, sanded. Then used a mini hand plane to round the edges, then sanded some more. Started at 80 grit on a random orbit sander and eventually worked my way up to 400 grit. I put on as much tung oil as it would take it. Eventually it looked like:

A couple more sandings with 600 grit, and more tung oil and she finally looked like:

The desks we have at work are a simply plywood with legs on the right side. The left side rests on a file cabinet. The finished product looks like:

Nick, your code is bad. It should be

TC, that is awsome!

rumination said:
Nick, your code is bad. It should be , not [image]. I can't see the pictures right now.[/QUOTE]

Despite Nick having TreeBuzz on his monitor, I fixed his embed code. If a file doesn't end in .jpg you can't use [img] codes, you gotta use the < imgsrc=" tag. Nice desk, Nick!
Click to expand... 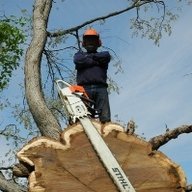 but I try to squeeze it in when I can.

I finished this dovetail const. picture frame up a couple of weeks ago. Wood is cherry, finish is Minwax wipe satin on poly.The pic is a colorized ariel photo of the family farm, taken in the mid 50's.

I did the this craftsman style table last year, it was a gift for my mother

more cherry. All mortise and tennon joints were done with my Festool Domino.
The flash was really to bright in this pic, it's darker in "real life".

Ed L said:
...more cherry. All mortise and tennon joints were done with my Festool Domino.
The flash was really to bright in this pic, it's darker in "real life".
Click to expand...

Really ??? I would've guessed curly Maple, but like you said it's showing up really *bright* in the pic. Mission Furniture style, simple & clean.
Such a beautiful piece ! Functional art, for sure !!!

NickAtNight, the desktop is a one-of-a-kind you can be truly proud of ! Acacia must be harder than a... well.... hard.

Nick, your wood turner friend steered you right. Looking at the end-grain, he had you join the pieces with the warp alternating >>> A smart move. I couldn't see the actual joints. Are they rabbet ? Couldn't be flat-face.
I'm so thrilled to see woodworking stuff !!!

Nick is your office in a yurt?

Nice, I watched a video about an alaskan pioneer (Dick Proenneke) and he showed a spoon making ordeal that took him a few hours with basic tools.

Nice vid, cool to see someone taking the time to do that. Axes and adzes can do surprisingly refined work if you use them a lot and get familiar, as with the chainsaw carvers. Looking forward to the next vid.

Bub just asked me to make a spoon next time we go camping, thanks.

I wont be posting that video I dont think. lol

Actually, there was a famous "bottomer", as they were called in the days in Great Britain where adzing chair seats was a profession in itself. I read about him, and named 'No Toes' Neville.

That would be a believable and conceivable nick name.

An adze has to be sharp, no ifs ands butts or toes about it.

I have watched the Alaska video and read the book. Good stuff. A long time to be alone. More fun to do with somebody.

i have seen clips of that video. looks like loads of fun... if you have some company. i think i would go nuts by myself. check this guy out. he puts me to shame! <object style="height: 390px; width: 640px"><param name="movie" value="http://www.youtube.com/v/JW1YzoRmvUo?version=3&feature=player_detailpage"><param name="allowFullScreen" value="true"><param name="allowScriptAccess" value="always"><embed src="http://www.youtube.com/v/JW1YzoRmvUo?version=3&feature=player_detailpage" type="application/x-shockwave-flash" allowfullscreen="true" allowScriptAccess="always" width="640" height="360"></object>

I like that hooked hammer like gouge he used or is it a type of adze. Sure did a quick job of it.