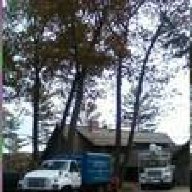 So what are you doing for health insurance? I want to leave big orange in spring to do my own tree service but the quotes I am getting for family health insurance is kinda giving me second thoughts even though I hate that place. I worked there for 20yrs and been doing side work for 15 yrs and it drives me nuts not being able to handle all the calls I get for treework.

If you don't have much income, the subsidies will supposedly make your rates much more reasonable. If you make decent money, you're screwed.

My VA takes care of me.

They even sent me a statement saying so.

You're one of the few people I know who actually likes the VA. Most are not pleased with the level of care.

Our insurance comes through the wife's work. We pay a portion of the premium and her company picks up the (substantial) balance.
F

lumberjack said:
Our insurance comes through the wife's work. We pay a portion of the premium and her company picks up the (substantial) balance.
Click to expand...

Most people scab onto anothers health care. Fact of the industry.
Seems very odd to me that the isa with such a huge membership has done nothing in this regard. I do know they provide for their employees. Why not for the industry???

Probably because there's no money in it for them. ISA is a revenue generating machine.

I am with Butch. Very happy with VA. Almost glad to have been drafted.

It was the best move I've made in my life.

Hell, I'm having cataract surgery on the 24th, FREE.

We pay $2k a month for wife and 2 kids. They just denied me treatment for hep c! I freaking hate insurance. I wanna drop it now that it's not mandatory but the wife won't let me.

I had good insurance till obama mandated it. Then it almost doubled, for less coverage too. I dropped it and paid the fine for a couple years, took a risk and got lucky. Nothing i do is safe from my work to after work activities.

Luckily i have it now thru Ashly. Insurance is a joke, as is the system.

Oh, and ive not once used my insurance before the change, and to this day.

(Comment spitefully in regards to the mandate and price increase)

Paul, how can they deny you treatment for Hep C!!?? Either you have it or you don't, What kind of shenanigans is that?

Fi the treatment is very expensive so they deny it, fooked but just how it is. Lots of folks have sued their insurance co.s and won over this . We will appeal. This is why I bought generic drugs from Bangladesh last time, don't have time or patients for this bullshit. This is just like when we flipped our chipper into the reservoir, had a full coverage umbrella policy over the business and autos but they still wouldn't pay. Our system over here is so broke the rich guys make their own rules.....

brendonv said:
I had good insurance till obama mandated it. Then it almost doubled, for less coverage too.
Click to expand...

I knew rates would increase and benefits decrease when O opened his piehole with his "plan". It was idiocy from the get-go. How can you force a company to insure those with known risks, and expect them to keep low rates? It would be economically impossible.

I have no health insurance. I consider it a scam. Not to say it doesn't work, mind you, but it is a scam. I know of TWO incidents personally, where medical costs were over $100k, yet settlements were agreed upon for around 10%. If you can settle with an insurance company for 10% of the bill, why can't you do that for an individual? I know if I'm getting storm trees off of two houses, one with insurance, and one self-pay, if I give a break, it AIN'T gonna be to the company.

Another example...we lost a baby back in 2007. I carried my wife to the hospital and she spent one night there. Discharged the next day (Sunday). Business office was closed. I called Monday to discuss paying the bill. The lady said it wasn't even in the system yet, call back tomorrow. Called back Tuesday, preliminary billing was there, but not final. She said if I'd pay in full right then, she'd let me have the Medicaid rate. Credit card payment over the phone for $925. She said to disregard any bill that may come in the mail. A week later, we got a bill for over $6000. Now, if they can provide such care for Medicaid patients for $925, (roughly 15% of total), and they can provide care for insurance customers at roughly 10% of total.....why the heck can't they provide the same care for folks who pay their own way? Barring cancer/organ transplant/bypass surgery/etc....(read "common medical issues")....most folks could manage 10%-15% of their bill, many paying via credit card on the spot.

Most folks couldn’t pay on the spot I’d wager, but that logic is more due to liquid poverty.

lumberjack said:
Most folks couldn't pay on the spot I'd wager, but that logic is more due to liquid poverty.

That was one of the two incidents I was citing...heck, that's less than a 5% settlement...

My point was, faced with a bill for $116k, you basically set up payments. If they openly said, on the other hand, if paid TODAY, it's $4600, I'd wager Carl would figure out how to make it happen!

lumberjack said:
Most folks couldn?t pay on the spot I?d wager, but that logic is more due to liquid poverty.

just curious...how long was treatment? night in hospital? follow up?

I think he meant $4600...I remember it being a ridiculously low number.

My mother had a heart attack back in 2000 I think it was, and the bill was over $112k. They settled for $10k-ish. Five to ten percent settlement (read 90%-95% discount) seem common for insurance companies. That's why I say they are a scam.

It's all part of the ruse to scare everybody into paying the outrageous policy rates. All those insurance company executives gotta pay for their yachts and mansions somehow. If you think you're protecting yourself against a possible $300K hospital bill by paying $10K per year then you pay it. But if you find out that the $300K hospital bill can be settled for $20K then how much value is it to pay the $10K in annual premiums?

Imagine a guy selling $50 gift cards for $25. Sounds like a deal until you find out he buys them for $5 apiece. Are you still getting a "bargain"? That's up to you. But in light of the facts, he's scamming folks. (You're actually paying $20 to save $25)

I've always thought it odd that if a couple of guys buy a reefer and stock it with ice, for which they paid $1/bag, then drive to the coast after a hurricane and try to sell it for $8/bag, they wind up arrested for price-gouging. How is that any different from a hospital "selling" their service to one (self-pay) patient at $100k, then sell the same service to the next (insured) patient for $10k? At least in the case of the ice, folks don't HAVE to buy it....