OK go ahead and laugh at my Poulan

It's a nice change. We need more green and yellow saws out there too.

I wish they would make all clones blue or anything different then OEM.

It pizzes me off seeing folks getting ripped off by the scammers selling the clones as oem with oem decals and badges.

People keep saying good things about those saws, but I shudder to think I'd put even an ounce of trust in the quality of that stuff when I see it. I guess I'm too meticulous. Most people just think if it runs, it's good, but I keep thinking of all the little details: metal shavings in the bearings and oil pump, loose cylinder plating, low quality plastic and rubber melting and degrading rapidly. Still fun to tinker with.

I was about to assemble some fake ms250's when I found the clam shell has a significant gap on all 4 blocks I have. I'll have to grind the bearing and oil seal slots for a better fit. I wouldn't want to crush the bearings and seals like it is.

I don't trust them, and I'm anti China, so it isn't a good fit for me. I also don't enjoy mechanical work, and I think you have to ready to really dig in with these units. I think they're best for a hobbyist that likes to fiddle with machines. If you put in the time, and perhaps swap in some oem parts, you can have a decent running saw. I'd rather just pay the premium, and go to the Stihl dealer for a decent running saw.

I’m not sure Sum ting Wong is up to snuff on the quality ... I’ve never built a Huztl or Farmertec personally so I can’t really vouch for the quality / durability ... I suppose a guy could use Oem crank , bearings, seals, jugs and slugs and build a runner ... I’ve had excellent results with the STIHL Pro line series of saws - yes they are more $$$ than the huztl/farmertec but consider that the Saw will pay for itself rather quickly and then its $$$ in YOUR pocket ... Iirc a STIHL Pro Saw will run anywhere from 1000-2000 hrs before needing a complete overhaul (depending on maintenance habits, fuel , sharp chain etc) and then can keep running till the cases clap out ... That’s ALOT of wood cut !

These are for the guys on a budget IMO and for saws that are no longer made.

Dont forget Zama is china made and stihl owned. Stihl even has a chainsaw factory in china now too. Along with many other company's.

I'd rather by US made but no longer out there. Those US assembled ones in Va Beach even say right on them made with foreign and domestic parts.
Heck look where most of your stuff in your garage, house etc are made at. Computers, smart phones, tv's etc etc etc

Now what I do find cool is the Brazil made 660 stihll for $1200 too. Just not sold to us anymore because of the epa crap.

Working on 8 saws that hadnt ran for 2 years +. Anyone see anything weird about this 039.

That be Johnny Paycheck. Dad retired to that song and so did I.

But I say take this saw and shove it working on them sometimes.

What am I seeing on that 038; cracked piston?

Looks like a missing pc of the piston , can’t tell for sure from pic though ! I know the price of oem STIHL pistons for some models have gone thru the roof recently ... looks like the master control lever is red instead of black ... must be an older model - carb

Hole right through the exhaust side piston. I was told to stop on it so didnt get to tear down for a look see.

SMH again. I keep telling this firewood cutter. Chips not dust and check that air filter from time to time.
She was getting passed into carb ven some too.

Sawdust WILL kill a Saw no doubt ... I’m a big fan of the max-flow system for Stihl saws where applicable - cut all day without messing with filter ! Or run a 395xp ... that filtration system is da bomb !!!

Were do you get parts for these china saws? Warrenty? Why so expensive?

Don't worry about color, buy 5 you get any color and logo you want. 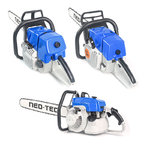 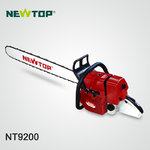 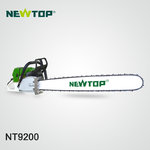 Local contacted me about buying a 2001 OE 372xp. I have so many saws in that cc I just dont need it.

I offered to picked it up and look over for my chainsaw repair group. Selling price I was told 400 PHO.
I pulled it down some, checked over and even put a b+c on it to test out.

Had a line made and 1st guy took it.

I think he got a good buy and he wanted it more for a collection type deal. Thinking younger guy that never had one.

Magnus said:
I see my fair share of bad saws...

Were do you get parts for these china saws? Warrenty? Why so expensive?

Don't worry about color, buy 5 you get any color and logo you want.View attachment 96141
Click to expand...

But the blue sure is pretty!!! It's a nice change.

Different for sure ! Lotsa guys selling STIHL MS660 on Craigslist- Chinese copies ... matter of fact there’s a guy trying to sell an 044 STIHL on eBay for a “reduced” price of $4300 !!! Wtf with these peeps ? Does the Saw come with dinner and a rub and tug ??? Link https://www.googleadservices.com/pa...wjF7tuXg5DlAhUCPq0KHeFsA98Qwg96BAgKEBI&adurl=

I could hear a rattle in the muffler. Plus I found this.
I had the NLA air filters for owner to purchase. Knew pretty much what the rattle was going to be.
Put on a new impulse and fuel lines and this 54cc was ready to cut. Rattle was the inner bolt came out. Baffle keeps it from getting in port if installed. it was.