Jed,
Here's my proposition... since you think we are so much alike.. I'll post a video or two showing some "interesting" tree work, then you post something to show off your moves...

Look at these cuts. Have you seen anything like them before or after? The first one I made up over 10 years, big dead ash top dangerous tree, made the cut so it could be triggered with a push of the hands, saw set away. In the countless videos published in the last 10 years, you will find no one that has triggered a top anywhere near that size with the push of the hands.

I'm sorry, I really don't think there is any need for this,
especially this day; and perhaps all forward.
And I really don't mean Cory(always loved the quote tho).
Timing can be everything, or the best machine or team is shit.
I try to stay out of the fray, but knot this day.

If I'm not mistaken, your a religious guy right Murphy? (maybe I'm thinking of Mellow) So put the pride aside and stuff like what's in the bible. You're starting to talk up your cuts and videos like Frankie does saws. Let someone else rep you, but don't rep yourself.

Corey: That's funny... all I could think about were the squirrels too. Man, what a buncha hippies we are!

Daniel: I used to watch Hotsaws101, and Buckin, and August, and think, "Man, I wish I had a GoPro, for half of the stuff I been doin' these days... I betcha some of that stuff would come out really cool." Weirdest thing: The company got me a GoPro, and all I got for like a year after that were a buncha nasty dead little snags, or else a buncha puny little doghair Firs which didn't ammount to anything more than a tall shot over the house for another, "look, ma, no hands." post on the treehouse. Gets old ya know? Plus, guys like Corey (He has privately shared with me ample videographic and photographic evidence.) routinely do way bigger stuff than I'm likely to get into, and they never even bother posting it. Got me thinking about myself, ya know?.... Like... why do I tell my daughter, "No Honey, I can't do that puzzle with you, I've gotta finish this vainglorious post of myself on the House so that all the brothers know I'm a man." Pretty dumb ya know?? Like what the heck do you and I still have to prove to ourselves after all these years. But there I go comparing ourselves again, and I said I wouldn't. I won't man, I'll leave ya alone. Plus I dig seeing yer stuff every now and again, so more power to ya. As for me, I'm likely to taper off a good bit with all of the, "Hey... check me out guys!" stuff. Sorry to let'cha down with the contest thing. Maybe a worthier opponent.

It's weird with Butch dying now too. Takes the wind outa yer sails. Man, this life moves right along, don't it?
M

Ya, losing Butch is a game-changer. Life will not be the sawm without that guy!
I watched a woman I loved beyond words take her last breath after 5 years of pain and suffering.
Now the covid-19.. maybe we all will live but millions are going to die... It's just strange when you think of these things in the grand scheme of things.

Jedidiah. You in the PNW. You doin loads of huge trees. I seen you tooken big tops. Pls continue posting vids, we all love em.

The more presence here from you, the better

Yea, I like videos. I don't watch a whole lot of them, but I like them on occasion. They don't have to be "elite" level tree work either. It's interesting seeing what people are doing day to day.

Nutball said:
If I'm not mistaken, your a religious guy right Murphy? (maybe I'm thinking of Mellow) So put the pride aside and stuff like what's in the bible. You're starting to talk up your cuts and videos like Frankie does saws. Let someone else rep you, but don't rep yourself.
Click to expand... 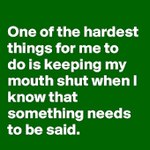 Dance like a butterfly and sting like a Bee. Cassius Marcellus Clay. He was an icon in my formative years. mid 60's up.

Everybody believes in something.

I believe I'll have a beer. Cheers!

lxskllr said:
Yea, I like videos.... They don't have to be "elite" level tree work either. It's interesting seeing what people are doing day to day.
Click to expand...

Always be able to learn from others, even if you think you already know about what they are showing. Some detail may sneak in, either do or don't type and tada you might have gained some knowledge. Just my perspective. Even the opportunity to have some food provided for thought is a plus in my book. Travor Ahearn unedited lets you think, for sure even if not grandiose. You could second guess Daniel's order on the conifer or tip tie placement and resultant branch motion or cut he used, then just take your thoughts he prompted and use them to benefit yourself. Glass half full.
M

I have learned SOOO MUCH from watching videos. mostly my own stuff, where I performed a task (obviously) so I know exactly what the set up was, and then something unusual happened and I can replay it in slow motion on the video editing software. I have gone frame by frame several times. Tenaciously teasing every bit of information out from what happens on the screen, because it all happens so fast in real life! I have also captured videos from youtube and transferred them to the editing software so they can be slowed down. It's been a wild trip!
Last edited: Mar 13, 2020
M

Here's a locust tree from last Wednesday...
What do you think Jed?

Maybe the secret was in the whistle he gave to prompt the skid steer to pull the tree over? Honestly, Murph's challenge to Jed reminds me of something I heard a friend's dad say 35 years ago when discussing someone of "importance".... "Oh well, he either wipes his *** from the front or the back, same as everybody else...."

Are there people actually impressed by videos like that..?

Is there another published video showing a full-sized tree being removed without a notch? This is not a coos bay, but I have never even seen a coos bay shown on video.
You must log in or register to reply here.
Share:
Facebook Email Link